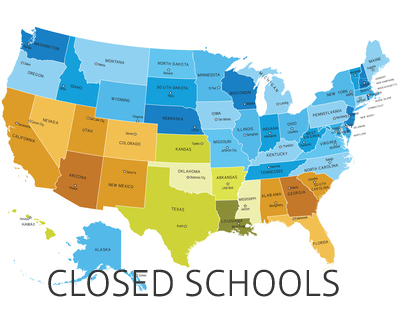 School systems are constantly being customized and upgraded to be able to provide the best environment for their students. Throughout the past couple of years, the number of public schools in the country has ranged consistently from 98,000 to 99,000. Although the number of total schools has stayed relatively stable, some schools have been opened and some have been shut down.

Based on statistics, in 2019-2020, 500 more schools were closed compared to 2000-2001. In 2001 there were 1193 school closings. In 2020, the schools that were closed had about 274,000 students enrolled. The number of closed schools during this time period does not indicate how many buildings were shut down. This is due to the fact that some schools might have multiple building or share a building with another school.

The schools that have closed were categorized as:

However, in 2019, we see schools are merging together and being consolidated. In 2019, there were 873 school closings and 293 school openings. There is an undeniably immense gap between the new schools opened and the schools closed.

Research demonstrates that school principals’ emails are constantly changing. On average, 35-65% of their emails change. The reasoning behind the change of email is due to:

Changes in school personnel happens every single day. Many school contracts are signed for only one to two years. Even if principals and superintendents are still in the same position, their emails frequently change due to high volume of emails or marital status change. School domains are constantly changing as they move to new email systems.

How to Repair Your K12 Email Sending Reputation

These Words Are Sending Your K12 Marketing Emails to Spam